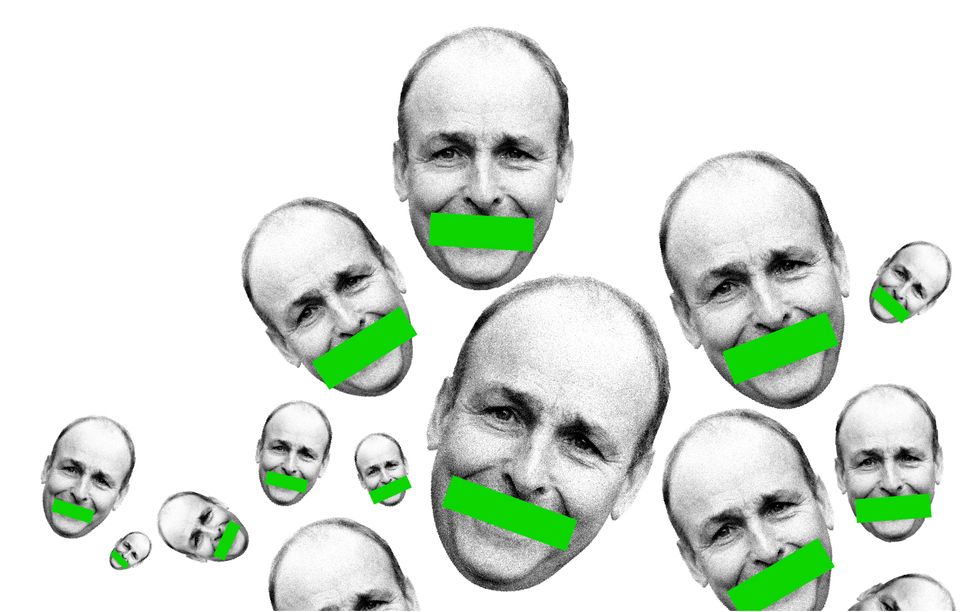 While at the event Martin told an attending garda to take off her face mask for a photo opportunity.

The event at Blackpool’s Glen Boxing Club went ahead when “no organised indoor gatherings should take place” under Ireland's level-three Covid restrictions. The event lasted 45 minutes and was attended by at least 12 people.

Cork County Boxing Board President Mick O’Brien said the gathering was permitted because of a directive issued by the Department of an Taoiseach to allow the December 12 event honouring amateur boxer and father of the Taoiseach, Paddy Martin, to be staged.

The focal point of the event was the presentation of the Paddy Martin ‘Champ of Champs’ Cup to Irish Elite boxing champion Christina Desmond, a Garda originally from Cork but stationed in Dungarvan, county Waterford.

Receiving the award from the Taoiseach, Garda Desmond asked attendees standing off camera, “Do you want me to take off the mask?” An unidentified woman told her she could, while Martin gestured at Desmond and twice told her to remove it.

While photographers took pictures of Martin and Desmond, voices off camera reminded them to spread apart from each other, and a laughing Martin told Desmond to maintain a distance from him “just so people won’t be talking – social distancing and all that”. Other photographs of the event show the Taoiseach failing to adhere to social distancing measures.

A spokesperson for the Taoiseach’s office earlier admitted to The Ditch that “official communications (like directives) do not emanate from this department... The Department of Health prepares the Health Regulations, which outline prohibitions on and regulations for indoor events.”

Just prior to publication however, the government press secretary insisted:

“Ahead of the meeting, as standard, the department provided a directive to the club, including strict limits on the number of attendees, social distancing, and wearing of masks when not speaking or in photos.”

A constitutional law expert said that even if the Taoiseach’s office issued a directive, it could not bypass existing legislation.

The official Garda Twitter account tweeted a picture of Desmond receiving the award from the Taoiseach. The following day, the same account tweeted a picture of Limerick and Waterford gardai being briefed ahead of their patrols on the day of the All-Ireland hurling final, along with the text: “An Garda Siochana will be out monitoring the celebrations in both counties this evening ensuring adherence to the public health guidelines.”

Martin’s government at this time was cracking down on breaches of Covid-19 restrictions and pleading with the public to follow the guidelines.

The day after the event, Martin, speaking in Cork, said it’s “very important that people follow the guidelines" and implored the public to reduce their social contacts.

"What I would say to people is that every contact matters. If people want to enjoy Christmas with their loved ones, particularly their parents or grandparents, it is extremely important that they watch their behaviour over the coming week.

“Make sure they reduce their number of contacts as much as they possibly can. Please wear a mask in crowded streets and crowded interiors such as shops and public transport."

Martin in his speech at the boxing event acknowledged that indoor gatherings had been prohibited for much of the pandemic, and he spoke of the hardships faced by people across Ireland who’d been forced to miss family events, referring to the death of one of his own personal acquaintances.

“I couldn't even be at the funeral, and I think that's the worst aspect of Covid-19 – that you can’t be with the families of people that you would most dearly like to be with, at times of sadness but also times of celebration,” said Martin.

People Before Profit TD Paul Murphy questioned the Taoiseach’s attendance at the event.

"While everyone would have sympathy for the Taoiseach wishing to honour his father, the rules at the time were clear. No indoor gatherings were permitted. By the Taoiseach breaking the rules he was responsible for, he undermined the public health advice. This is unfortunately just the latest example of establishment politicians acting as if the rules do not apply to them.

"I've no doubt that those who were correctly encouraged to resign over Golfgate will be wondering whether Martin will apply those standards to himself," he said.

Chairman of Glen Boxing Club Anthony Connolly declined to comment on the event and, without providing their details, said The Ditch should contact the club’s solicitor.

Garda Christina Desmond said she had no knowledge of a directive issued to allow the event to proceed and refused to comment on who invited her to the event.