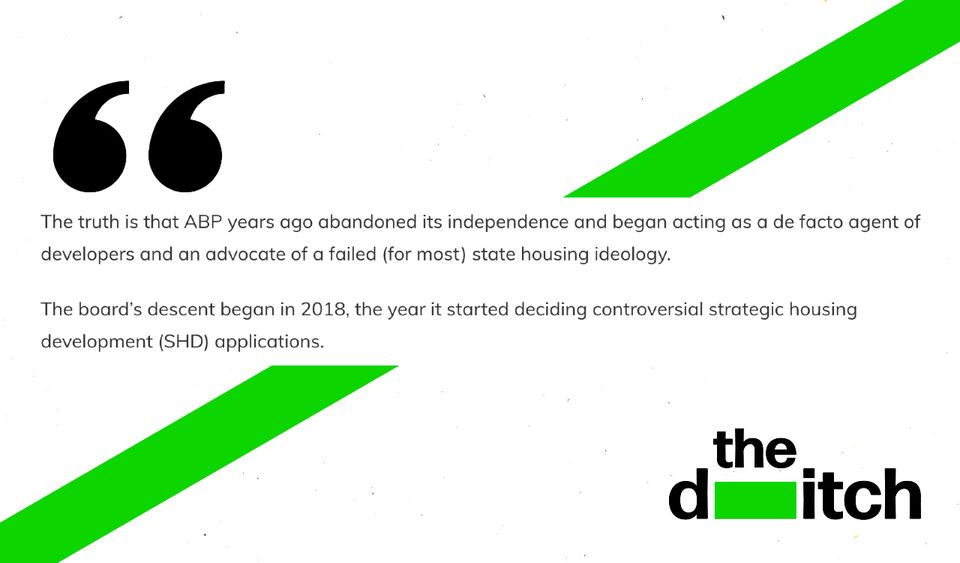 The received wisdom on An Bord Pleanála (ABP) used to be that it was a truly impartial decision-making body. And it largely was. Unlike many local authorities, the planning tribunals didn’t implicate ABP. It was a part of the planning system where brown envelopes were used only for sending post.

Now however ABP is independent only in its own pleadings, which have been repeated by the likes of housing minister Darragh O’Brien throughout the continuing controversy at the planning authority. “The board is independent in its performance of its functions,” as O’Brien said in a Dáil debate this summer (before both Paul Hyde’s resignation and the announcement of the criminal prosecution of the ex-deputy chairperson).

The truth is that ABP years ago abandoned its independence and began acting as a de facto agent of developers and an advocate of a failed (for most) state housing ideology.

Simon Coveney was the progenitor of the fast-track housing legislation, introducing it within six months of becoming housing minister. This legislation, which would treat large property developers as VIPs and have their applications decided directly by the ABP board, was to be Coveney’s lasting legacy in the Department of Housing.

It so happened that Coveney’s best pal – Paul Hyde – would lead the SHD division.

It was Coveney who gave Hyde his first state board gig, appointing him to the Marine Institute in 2012. Hyde’s qualifications for that role came no doubt as a result of his yachting experience – he had even co-owned a yacht with Coveney. The merchant prince and his architect sidekick saw some success with their Dark Angel yacht at Kinsale’s suitably named Sovereign's Cup Regatta, according to a 2005 newspaper report.

Hyde’s introduction to ABP came in 2013 when the Irish Rural Dwellers Association nominated him for a board role. That the organisation had ceased to exist in 2012 didn’t bother the bluest of blueshirts, Phil Hogan, who went ahead and appointed Hyde.

The Corkman comes from impeccable Fine Gael pedigree himself. Both parents had been officers in their local Fine Gael branch in Glounthaune and one of Hyde’s uncle, Kerryman Paul Coghlan, was a veteran party senator.

Could there be a better candidate to be ABP’s go-to guy for SHDs? He’d need company though.

‘The most unthinking of the unserious self-proclaimed YIMBYs’

In February 2018, just as ABP began making its first SHD decisions, Fine Gael housing minister Eoghan Murphy appointed architect Michelle Fagan to the board. Just like Hyde, Fagan wasn’t nominated to the board by a planning organisation. It was Ibec that believed she was the best candidate for the job. And just like Hyde, she also sat on the SHD board.

Allowing applications for massive residential developments to be decided by just three board members was bound to be messy. With duo Hyde and Fagan installed on the SHD board however there was a particular certainty about the kind of mess that would ensue.

As SHD applications began to increase in 2018, so too did the judicial reviews, with members of the public lining up to challenge in the High Court what they considered poor decisions. ABP lost or conceded nine in every 10 of these legal challenges.

It became clear that the board operated a policy of approving ill-planned housing developments for the benefit of big developers who consider only their bottom lines. In a number of cases the board went so far as to ask inspectors to change their reports to meet the needs of these developers.

And governance issues haven’t been confined to board members – take a look at planning director Rachel Kenny. She scorned planning objectors and praised co-living developments as a speaker at build-to-rent events organised by property developers. She had no issue approving SHD applications for her architect husband’s clients and has occasionally played the role of inspector in her own neighbourhood.

Kenny, speaking at one of her side gigs promoting the build-to-rent industry, felt comfortable enough to joke about having post-event pints with a property developer pal. That was after she’d bemoaned members of the public who’d objected to SHDs. “It is unfortunate… 90 percent, 95 percent are appealed… people just generally have an issue with new homes being built,” she said, sounding like the most unthinking of the unserious self-proclaimed YIMBYs.

The period of declining standards at ABP coincided with the appointment of Dave Walsh as chairperson in October 2018. A yes-man, Walsh frequently ignored planning legislation and the board’s code of conduct. His role at ABP was simple: that of a figurehead. Hyde ran his own SHD fiefdom with Walsh failing to exercise any control over Fine Gael’s inside man.

Call it what you will, arrogance, confidence, obliviousness, but Walsh hasn’t yet resigned. As it stands, we’re stuck with him for another two years, with housing minister Darragh O’Brien reckoning Walsh is the man to implement proposed reforms at ABP.

O’Brien himself has only appointed one new face to the board since he became housing minister in 2020. Patricia Calleary, sister-in-law of Fianna Fáil TD Dara Calleary, was appointed in March 2022, having served as an inspector at ABP since 2016. She was proposed for the lucrative gig by the Irish Creamery Milk Suppliers Association.

And this is where we are, in the middle of the worst housing crisis in the state’s history.

We’re now expected to write-off the last five years that saw ABP act as a representative for the needs of property developers instead of in the interests of the people who have to live with its decisions. Paul Hyde’s gone – let that be that, says the Irish establishment that presided over ABP's fall.

ABP’s board was packed with members who would implement state housing policy and ideology and ram through SHDs at any cost. Developers came first, sustainable development in the interests of people didn’t feature. Fine Gael had the best interests of property developers at heart and ABP ensured their needs were met. In doing so, ABP destroyed a four-decade reputation in less than five years. Reform won’t reverse this.

An Bord Pleanála has left the building.