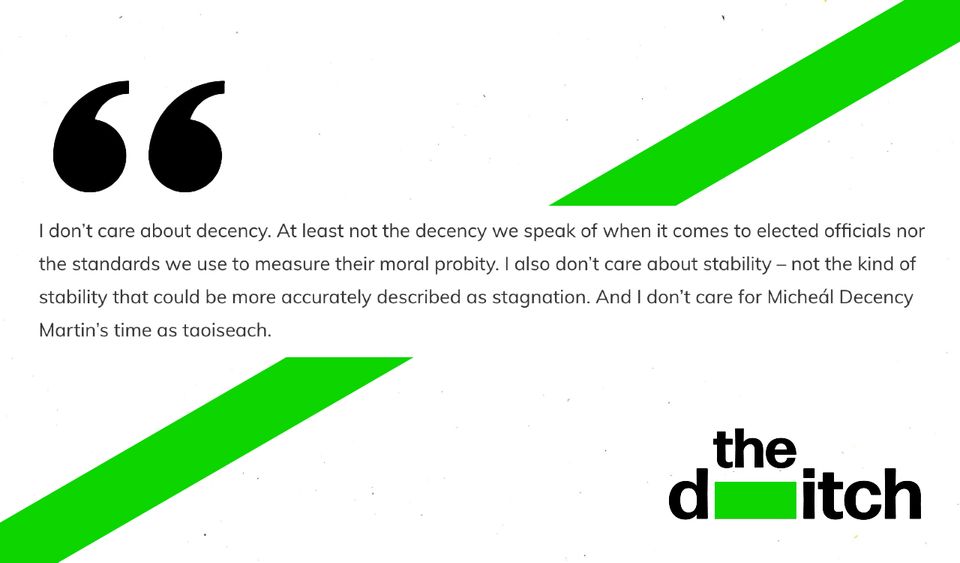 I don’t care about decency. At least not the decency we speak of when it comes to elected officials nor the standards we use to measure their moral probity. I also don’t care about stability – not the kind of stability that could be more accurately described as stagnation. And I don’t care for Micheál Decency Martin’s time as taoiseach.

Words can affix themselves to people, or rather people can stick words to others. Micheál Martin’s word, the word that follows him around, is ‘decent’. “Disagree with his politics all you like, but…”; “Say what you want about his political career, but…”; “Whether you voted for Fianna Fáil or not I think we can all agree Micheál Martin is…,” or similar being the openers, followed by the attached clause outlining just how decent the man is.

This is how the least serious people walking among us describe the putatively most powerful person in Ireland, the person whose vision for the country – if we are to treat the office of the taoiseach with any kind of respect – is lived out around us. Considering the power Martin has had to effect change, that people so often reach for something nice to say about his apparent decency speaks to the kind of leader he has been.

He missed a hurling match!

With a depressing historical inevitability, Micheál Martin became taoiseach on 27 June, 2020. The electorate, its representatives and the state itself weren’t quite ready to shackle him with the ignominy of being the first Fianna Fáíl leader to never be taoiseach. He finishes up at the weekend.

Martin, this week in the softest interview you’ll ever read, was asked what’s the biggest regret of his political career. And like any good Gael, his answer involved a reach for the GAA, signifier of all that’s decent in our great wee country. "The smoking ban was coming in and so I missed St Anthony's winning their seven-a-side indoor hurling. Micheál Aodh (his son) could never understand what I was doing up in Dublin. He had only one thing on his mind, and that was winning the hurling,” said Martin. Sure isn’t that the only thing on all our minds, the auld football and the hurling, good man Micheál, good man.

It’s somewhere between offensive and absurd that a man who has held the highest offices in the state, when asked about what he would’ve done differently, has either the arrogance or indifference to offer some schmaltz about an underage hurling match. The defenders of his decency slurp it up.

In the same interview he said he’d like to be remembered for “the fundamental issues to do with housing, climate change and health reforms, education and childcare". Why though would he think these memories of him would be fond? These are issues that both he and his party, in and out of government, have shown themselves to be either unwilling or unable to address.

Look at three – housing, education and healthcare – and consider where we’re at.

Our housing crisis is better described as a disaster, as Michael D Higgins put it, with a record 11,397 homeless people, as well as a further “hidden” 290,000, not afforded the basic human right to shelter. Those paying either an institutional investor, vulture fund or fabled ‘accidental landlord’ have to deal with record rent increases.

The Catholic Church runs more than 90 percent of our primary schools, allowed to do so in the absence of any alternative from the state. Secondary students looking to progress to third-level education know if they come from Dún Laoghaire–Rathdown, more than 60 percent of the people in their community have completed degrees, while those in Longford and Wexford have to accept only 33 percent in theirs have done likewise.

Our healthcare system, in how it favours those able to pay at the expense of those who can’t, remains an affront to genuine decency.

These may seem like problems that no one man, party nor movement could solve. But remember: Martin would like us to think of him when we think of them. And there’s always a way.

Take healthcare. A former British health minister once said, "No society can legitimately call itself civilised if a sick person is denied medical aid because of lack of means." Civilised – awfully close in meaning to decent, in the way the word is applied to our outgoing taoiseach. What that health minister said is true of Ireland – our health system does indeed prioritise people based on their means. This health minister and his government decided to change that.

Aneurin Bevan, the British Labour Party health minister who led the establishment of the NHS, at a national party conference just after Labour had suffered three consecutive election defeats, defended the political tradition he represented, socialism, and what he thought it could deliver to his country.

It was 1959, the golden age of capitalism, a time often harked back to both in Britain and Ireland, when people – meaning of course some people – were afforded a certain level of material security. Still Bevan in his speech called the world he inhabited, that world that to us in hindsight seems safer, even more meritocratic, for what it was. “This so-called affluent society is an ugly society still. It is a vulgar society. It is a meretricious society. It is a society in which priorities have gone all wrong,” he said.

And he was right, particularly on the issue of priorities, which he further elucidated, “I once said – and I do not want to quote myself too frequently – that the language of priorities was the religion of socialism, and there is nothing wrong with that statement either, but you can only get your priorities right if you have the power to put them right. And the argument, comrades, is about power in society.”

Whether it’s Bevan speaking of the language of priorities of those who hold power and what they decide to do with it, or Arrested Development’s George Bluth telling his son, “There’s always money in the banana stand,” there are always solutions – those in charge may just decide against taking them. In Bevan’s case, he along with his party decided the foundation of a national health service, free of charge to all, was a priority, one they acted on.

Martin (himself a former health minister) and his party have had power in Ireland for most of the last century and parts of this. The country they’ve built is the result of their values. It’s the result of what they’ve prioritised.

I accept the unfairness of comparing Martin, a career politician who simply waited around long enough to be anointed leader, someone whose own supporters barely seem to expect anything of, with Bevan, who in his late 40s was possessed of the determination to establish a health system that, though imperfect then and now, nevertheless instituted real, honest change for his people. But I’ve done it anyway. I think more of us should do likewise, should think about what we expect from our leaders – something beyond decency and stability.

Some have no inclination to do that.

One of the reasons Bevan gave for the Labour Party’s electoral failures was the “very considerable number of young men and women in the course of the last five or 10 years have had their material conditions improved”. These people, Bevan said, “are satisfied with the framework in which they live. They are not conscious of constriction. They are not conscious of frustration or of limitation as formerly they were.”

These are the kind of people for whom Martin’s supposed decency is enough. They’re satisfied. They’re comfortable. They also happen to be among the most vocal among us, the people with national platforms or the confidence to shout loudest in our public places, both on and offline. People like Kathy Sheridan at the Irish Times, who this week opened her column by telling us, “Like it or not, there is something reassuringly boring about the impending transfer of power between the old Civil War enemies.”

Personally I don’t like it. And I don’t think that “boring” is reassuring, nor do I think that boredom should be considered any kind of substitute for inspiration. Equally I don’t think that being “a safe pair of hands” – as the Irish Examiner said summing up Martin as taoiseach, while reminding us of his “common decency” – should be thought a good thing, not when being safe is either failing or refusing to change anything.

Psychoanalyst Jacques Lacan in a 1954 seminar spoke of the oppression and violence carried out under the cover of ostensible civility. “Isn’t the path for the race to destruction really rather well marked out for us? Hatred is clothed in our everyday discourse under many guises, it meets with such extraordinarily easy rationalisations,” he said.

We should understand that well in Ireland, after two lost years of Micheál Martin’s (lack of) leadership, his failures in housing, healthcare and education – failures that have caused harm to so many, but for some reason he wants to be part of his legacy. The “extraordinarily easy rationalisation” afforded to Martin?