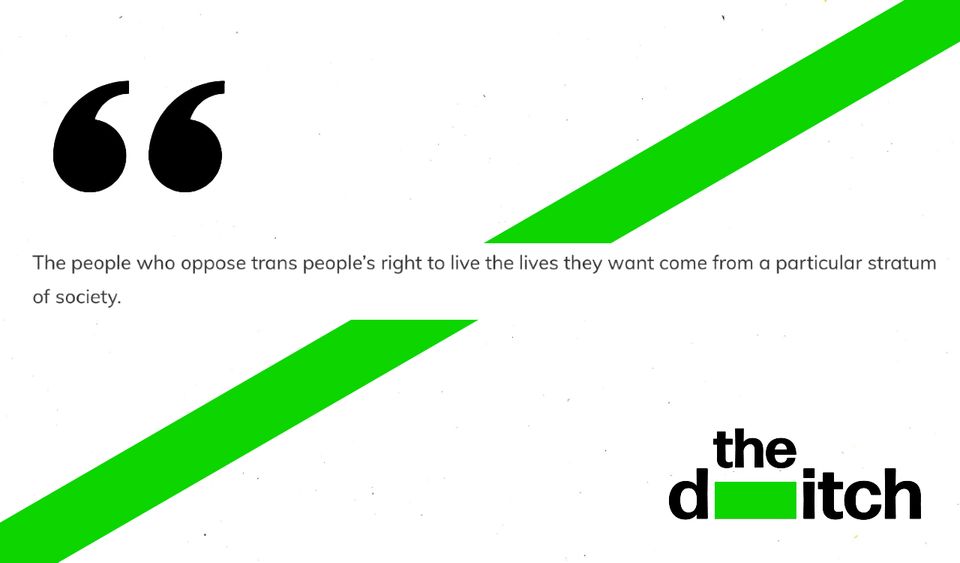 ‘To destroy the concept of motherhood: that is revolutionary.’

'I wanna say this: if you’re gay and transgender, I love you. Hey – and if anybody give you shit, you tell ‘em Charles said, "Fuck you."'

There are few Irish people who can tell you where they were on 15 July, 2015​​. Some gave birth, some married, some celebrated anniversaries and birthdays. I’m sure the date holds significance for them, but it’s not like, say, 25 June, 1990, when Packie Bonner saved Daniel Timofte’s penalty, nor 16 August, 1977 when The King died. The date doesn’t inspire a collective memory where most people can say where they were at some stage when that day’s 24 hours elapsed.

It’s the date the Irish state passed the Gender Recognition Act. So while the date may not be readily significant to most, it is to transgender people living in Ireland. It was the day the state finally allowed Irish trans people aged 18 or older, after many years of struggle, to legally identify as their chosen gender.

The passage of the act wasn’t rushed, not the result of the vagaries of social mores, but rather a point in a more-than-decade-long campaign first initiated, legally at least, in 1997 by Lydia Foy, a trans woman from county Kildare. Foy, having undergone a transition, took a High Court case against the state, seeking to receive a new birth certificate recognising her female gender. The case was unsuccessful but in a separate case in 2008, the High Court ruled that the finding in Foy’s first challenge was incompatible with European law. After government’s failure to legislate for this ruling, Foy in 2013 took a third High Court case, which eventually forced the state to pass the Gender Recognition Act in 2015

Thanks to this act, trans people in Ireland achieved some level of deliverance. It’s a deliverance they needed.

Half of the trans people surveyed in 2013 by the Transgender Equality Network Ireland were unemployed. Eighty percent had considered suicide and almost half of these people had made at least one attempt. Because of a fear of harassment more than 80 percent of respondents stayed away from public places. Ten percent said they knew someone who’d been murdered because they were trans.

The same study found that among those who transitioned, 75 percent said their mental health had noticeably improved. More than 90 percent of these were more satisfied with their bodies and more than 80 percent were more happy with their lives.

The Gender Recognition Act legislated for trans people in Ireland’s right to live the lives they deserve. Should it need saying that this is a good thing?

For some it wasn’t. For some it represented a new hobby – the opportunity to consider trans rights as something to debate, like most normal people would just adopt a football team to support.

It’s Transgender Day of Remembrance today, which will finish off what’s been Transgender Awareness Week. It comes after last weekend’s Women’s Space Ireland meeting of so-called ‘gender-critical’ women in Dublin. The meeting, according to a report in the Murdoch-owned Times Irish edition, conformed to the standards of British-imported trans-exclusionary feminism, of which Ireland has experienced increasing levels.

There was the undue focus on a different country: “In England, our schools have adopted gender identity dogma,” as speaker Helen Joyce said – okay, but we aren’t English. There was a contrived moral panic about our children: “I don’t think that schools should be teaching children lies,” again, Joyce. And there were the self-righteous-but-bogus claims of moral superiority. “I haven’t said anything wrong,” said Norwegian activist Christina Ellingsen, who has refused to respect trans people’s right to self-identify as their chosen gender.

The people who oppose trans people’s right to live the lives they want come from a particular stratum of society.

Writer Jules Joanne Gleeson and political economist Elle O’Rourke in a co-authored 2021 piece wrote about the “traditionalist voices” for whom “only the oikos exists beyond the rapacious squid’s tentacles”. The appeal of the traditional family (and traditional power structures) to these people however, say Gleeson and O’Rourke, “rests exactly in its total immersion in the reproduction of capitalist relations” – in the way it both reflects and buttresses the way things have always been.

That these forces are increasingly vocal at a time “when standards of living are ravaged and proletarian households reach their breaking point” is “no coincidence”, wrote Gleeson and O’Rourke. The opposition to the expansion of trans rights is a regression, a retreat to a simpler, easier time for the more comfortable among us, who have a material interest in resisting change.

In a 1976 interview, about 25 years after the publication of The Second Sex, Simone de Beauvoir spoke of whom she called “women on the right” who “do not want revolution”. These women, de Beauvoir said, “are mothers, wives, devoted to their men. Or if they are agitators at all, they want a bigger piece of the pie. They want to earn more, elect more women to parliaments, see a woman become president. They fundamentally believe in inequality, except they want to be on top rather than on the bottom.”

‘They can't do anything to us’

I appreciate when people make explicit their class interests. It makes things easier.

According to a report of the Women’s Space Ireland event, an ‘Anne’ made a simple-but-illuminating contribution. "They can't do anything to us – we have our pensions," she said, rejoicing in what she considers her position in society and right to say whatever she feels, no matter the hurt it causes to others. Good woman yourself Anne, you got yours. Hope the pension’s private and I hope it’s worth it.

Along with people like Anne are other reactionaries. They line up, one after another, to speak the most retrograde of platitudes, proud of their failure to understand the seemingly changing world around them and thinking their continued ignorance is some kind of rebellious act. The words they speak have been dogma for centuries though – words like “You are a man. You cannot be a mother,” as event speaker Christina Ellingsen, a Norwegian activist, has chosen as her hill and resting place, the words that she’s being prosecuted for under her country’s hate speech laws.

In their repetition these words may as well be nursery rhymes, childlike and infantile, not fit for use in a mature world. It’s not even that the world has changed – because there have always been trans and gender-non-conforming people living alongside us – but that it’s begun to take notice of, respect and acknowledge the existence of trans people.

Again this is a good thing. That shouldn’t need saying. For those who don’t get that: read NBA Hall of Famer Charles Barkley’s words up top.